The Toledo Design Collective is a volunteer-supported, non-profit 501(c)(3) organization. Your contributions help further the mission of the TDC.

Donations will be matched dollar-for-dollar, up to $10k (to jumpstart this year’s effort with $20k), by an anonymous foundation. Match is awarded in 2020 for the TDC Legacy Fund. You can donate today using the link below. 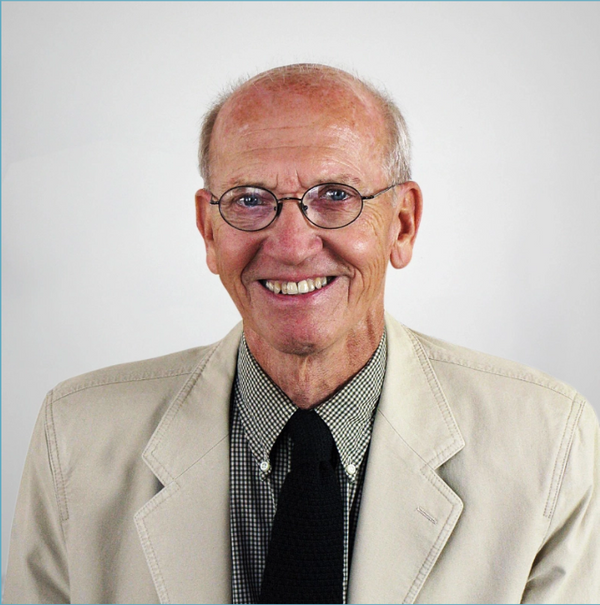 Robert Seyfang founded of the Toledo Design Collective (Center) in 2001 following his retirement from the architectural/planning firm of Seyfang Blanchard Duket Porter.

He began the firm as Robert F. Seyfang, A.I.A. in 1971. After graduating from Miami University in 1959 with Bachelor of Architecture degree and a Master of City Design degree in 1961, he became a licensed architect in 1965.

He is considered an “urban pioneer” in Toledo after buying and completely renovating the Bakery Building into five commercial and eight residential loft spaces in the then emerging historic Toledo Warehouse District in 1988. He moved his architectural firm and residence into the building a year later.

He also was a founder of the Downtown Toledo Parking Authority in 1996, served as the first Chairperson of the Board of Directors and continued to serve on the Board until 2018. He also helped to develop the Downtown Toledo Development Corporation now known as ConnecToledo. Other civic organizations he has served include American Institute of Architects, Toledo (President in 1976), AIAOhio Foundation Board, the Toledo Warehouse District Association, The Salvation Army (Chairperson, 2007 & 2008) and the Perrysburg Ohio Historic Landmarks District Commission and currently represents the TDC on the Marina District Architectural Review Committee.

The Toledo Design Collective has emerged and developed from a somewhat vague idea into a viable and effective community advocate for design and planning excellence in the first twenty years of existence. The next twenty years are envisioned to have even greater potential based on outstanding current staff leadership and mentoring ability, effective Advisory Board participation and enthusiasm and especially a dire community need to continue striving to maintain Toledo as a great place to live, work and enjoy.

TDC employs 3-5 interns each year. To date, TDC has helped launch the careers of more than 30 individuals.

Since 2001 TDC has completed 14 Neighborhood Master Plans, in addition to other projects, studies, workshops, and charrettes. This year we’re working on four master plans in addition to two other major projects.

TDC was awarded its first ever grant this year, a grant from Fifth Third Bank for neighborhood development.

“The projects we worked on called on us to create maps and graphics, extrapolate and manipulate census information, make presentations to community groups, and interface directly with residents in the neighborhoods in which we were working. This was invaluable in creating a resume and building a professional portfolio. Additionally, the networking opportunities provided through interning at the Toledo Design Collective created the connections that led to full time employment in Toledo, an opportunity I could only have dreamed of when I set out to graduate school. The Toledo Design Collective was one of the most impactful three months of my professional career, and I look forward to being a part of the TDC’s future efforts.”

“My internship at the Toledo Design Collective taught me that a city, no matter how large or small it may be, is a lot more than it’s physical infrastructure. I learned how a place's social infrastructure leads to the creation of the city as a whole.”

“Toledo is composed of many different neighborhood identities with their own assets and challenges. The TDC works with these neighborhoods through a grassroots planning approach which hopes to bring out the collective voice of the neighborhood, which is drawn together into an urban plan; a record of aspirations for the future. I had the pleasure of working in the Old South End, the Warehouse District, Uptown, and the Junction neighborhood and with the stakeholders and residences who identified with these neighborhoods.

The diversity of experiences in my short time as an intern at the TDC is one that I don’t believe I could have been given anywhere else. Immediately following my internship I received a job as an Architectural Associate at Duket Architects Planners, a local Toledo-based firm that has been in business for nearly 50 years. This was made possible because the principle of which served as a board member of the Toledo Design Collective and allowed me to tour their office. I have been at Duket Architects Planners for over three years now and have continued my connection with the TDC and the mentors I made through my internship, which have been instrumental in guiding my career path today."

“To work at the TDC is an indescribable experience. As the TDC has nearly 40 volunteer board members from various expertise, there is always something new to learn. They all share the same passion for pushing the needle towards sustainable design and equitable development: both human and built development. I would not be where I am today without our incredible board members.”

Elizabeth Ellis started at the Toledo Design Center, now Collective in 2017 as LISC AmeriCorps member. As an AmeriCorps, Elizabeth had the opportunity to re-discover her hometown with deeper respect for its pre and post-industrial architecture and city infrastructure. She has fostered meaningful relationships with neighborhood organizations through her passion of equity through sustainable urban design.

As recently appointed Studio Director, Elizabeth is excited to maintain and even increase the momentum of the TDC mission: that thoughtful urban design and planning should be a right of everyone, not a privilege of few.

"My internship at the Toledo Design Collective allowed me to invest in a community that I did not grow up in and see the real impact that long term urban planning can have in neighborhoods."

"I am now the VP of Construction and Planning at the Toledo Zoo—a job I never knew existed prior to moving to Toledo, in a city that I did not have on my radar prior to my internship. TDC gives young professionals opportunities to make an impact that's larger than themselves, draws people to and back to northwest Ohio, and gives them the skills to run large charrettes, make presentations and produce work that communicates complex ideas in simple forms. Continuing to support the TDC as a board member has given me more opportunities to connect to neighborhoods and partners in the Old South End, Central business district, the Vistula neighborhood and Toledo as a whole."

We need your support

The power of the TDC’s board of professional volunteers cannot be delivered without the time and talent of our full-time staff and paid interns. The Legacy Fund makes these positions possible, which allows us to better fulfill our mission advocating for excellence in design and planning for Toledo.