One of the oldest neighborhoods in Toledo, the OSE is an ethnically diverse neighborhood that connects the Toledo Zoo and the downtown Central Business District.

While the Old South End’s diversity is a huge potential for strategic planning, there are infrastructural deterrents within the fabric of the neighborhood which are challenging. Broadway Corridor continues to be the main connection into and out of the neighborhood, but the other secondary streets do no promote connectivity and make it difficult to navigate the neighborhood. One way streets muddle traffic flows and bus routes are very limited to a community who relies on public transit to get around.

Even though the neighborhood is in a location that could have access to the Riverfront there is a huge disconnect from the Maumee River but also open space in general. Parks and open space are potential amenities that are missing in the Old South End. While current neighborhood green space is used—if it has been properly maintained these natural resources are currently isolated. By integrating more useable and maintained parks the neighborhood would benefit.

The Old South End Master Plan created an informed Framework Plan for the redevelopment based on 5 overarching goals: provide neighborhood services, reinvent Broadway, enhance regional destination of the neighborhood, stabilize and improve existing housing, and empower the Broadway Corridor Coalition (BCC). The BCC is an established 501c3 non-profit and holds a weekly meeting of over 25 board members. The calming solutions along Broadway have been put on the long term street plan for Toledo, the housing along the 300 and 400 neighborhoods of Crittenden has been flipped, Danny Thomas Park is receiving a 1.5 million dollar renovation and the c-6 overlay text amendment has been approved by the City of Toledo Plan Commission. All focusing on the three planning initiatives of The Reinvention of Broadway, Residential Stabilization and Expanding Open Space and Parks. 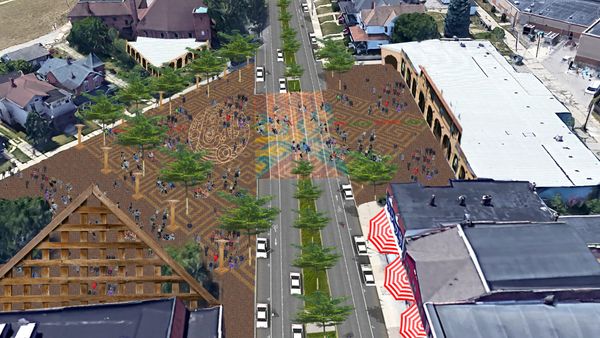 Thank you for partnering with us!